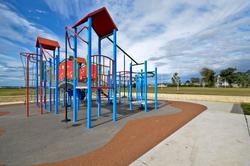 Acacia Gardens is located 40 kilometres west of the Sydney central business district, in the local government area of the City of Blacktown. Acacia Gardens is part of the Greater Western Sydney region and loosely considered to be part of the southern end of the Hills District.

Acacia Gardens was formerly a part of Quakers Hill. The name was chosen to reflect the rural quality of the suburb, with acacia trees being prevalent in the area. Many of the streets in the suburb are named after flowers. It was formally recognised as a suburb in 1996.