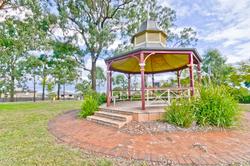 Quakers Hill is located 40 kilometres west of the Sydney central business district, in the local government area of the City of Blacktown. Quakers Hill is part of the Greater Western Sydney.

Public Transport to and from Quakers Hill is provided by train and a number of bus services by Busways. Quakers Hill railway station is on the Richmond branch of the Western railway line of the City Rail network.

Quakers Hill has experienced much road development over recent years including the construction of a new road leading directly to the education precinct, bypassing the town centre. The Westlink M7, which links the suburb directly to all major routes in and out of the greater Sydney region, opened in December 2005. Following this opening the road overpass for the Quakers Hill Parkway has been widened from two to four lanes, improving toll-free traffic flow between Richmond and Sunnyholt Roads. The Quakers Hill Parkway Bridge (going over the train line) was recently widened from two to four lanes.

Quakers Hill has a blend of old and new developments. There are some Housing Commission Houses on the older (southern) side of Quakers Hill, mainly near Marayong. The western side of the railway line predominantly has houses on standard residential blocks, some built when HMAS Nirimba was an active naval base, others through the 1960s and 1970s. The eastern side of the railway line consists of dwellings constructed since the 1980s, with a high proportion of high density homes or townhouses.

Quakers Hill is home to numerous schools and educational institutions. The oldest is Quakers Hill Public School, opened in 1912. Two other public primary schools (Barnier and Hambledon) were opened in the 1990s to cope with suburb's growing population. High schools in Quakers Hill are split between Quakers Hill High School, catering to Years 7-10, and Mary Immaculate and high school Terra Sancta College. Post-secondary education is serviced by Nirimba TAFE College and the University of Western Sydney, Blacktown Campus. Four of these facilities (UWS, Nirimba TAFE, Wyndham and Terra Sancta) are located together in the Nirimba Education Precinct.